Freesia: Planting and Growing, Indoors or Out

Freesia is one of the most adorable flower plants that you can grow in the garden or indoors. It belongs to the bulbous perennial Iridaceae family that consists of about 20 species. Perhaps, Freesia Hybrida is the most commonly known of them. It has been cultivated by crossbreeding of several species of freesia about a hundred of years ago. 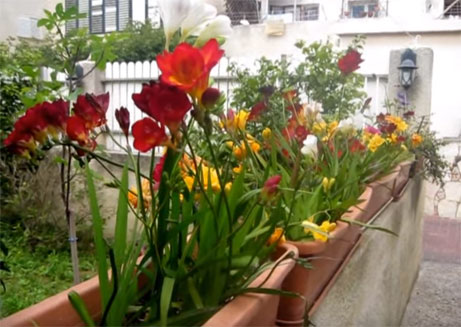 The origin of freesia is South Africa. There the plant grows along the coastline and between bushes.

The aroma of elegant, graceful and tender freesia reminds you of lily-of-the-valley, that’s why people also refer to freesia as a Cape lily.

The plant’s got its name in honour of the german botanist and doctor Friedrich Freese. With flower gardeners, freesias nowadays are enormously popular as cut flowers.

Freesia Hybrida can grow up to a meter high, has a leafless, branchy flower stalk. The bulb has thin brown skin. Leaves are narrow, 15 to 20 cm long and 1 to 1.5 cm wide. The fragrant flowers are about 3 to 5 cm long, put together in single side (comb alike) inflorescences.

The fruit of freesia is a pod.

Species and Varieties of Freesia

In outdoor gardens you mostly will find Freesia Hybrida. It was cultivated by crossbreeding of Freesia Refracta and Freesia Armstrongii. These two species were at the base of many freesia varieties that we are now going to tell you more about.

It's a 65 to 70 cm high freesia with campanulate shaped, red, pink or ruby flowers, grouped together per 3 to 5. Corolla tube is white with yellow spots. Leaves are long and ensiform. Normally, these species of freesia bloom in May and June.

Cardinal is one of the most beautiful varieties of Freesia Armstrongii. It's about 70 cm high and has red single flowers. One bulb shoots 3 flower spikes. The inflorescence is about 9 cm long, each panicle has 9 to 11 blooms.

Flowers are dark red with yellow spots. Filaments are yellow with violet anthers, pistils are blue. 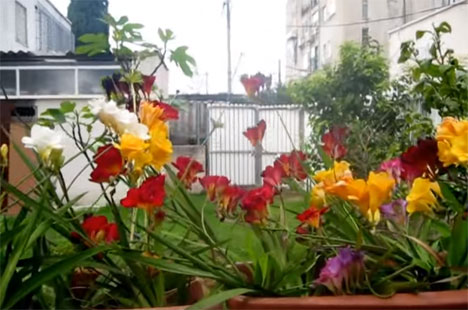 This species of freesia combines the best characteristics of its progenitors. It's tall (up to 1 m) and very branchy; flower panicles have large (5 to 7 cm in diameter) fragrant single- or bi-coloured blooms in violet, crimson, yellow or other tones.

Freesia Ballerina has white flowers that have a pinch of yellow at their base, with frilly petals and a delicate aroma. The center of a bloom is white with a yellow stripe. Each spike bears up to 12 flowers, 5.5 x 6.5 cm in size. Stalks of freesia ballerina are 25 to 30 cm tall.

Freesia Rose Marie has 20 to 25 cm tall stems. Each inflorescence has 7 flowers (4.5 x 4.5 cm in size.) Petals are raspberry-red at their edge and white with a crimson stripe at their base.

Freesia Oberon is a 45 to 60 cm high plant with orange-red fragrant flowers.

Freesia refracra is noticeable for its miniature size: these plants are not taller than 40 cm, have thin branchy stems and 2 to 5 flowers per inflorescence. Flowers are white or yellow-orange. Averagely, freesia refracta starts blooming around April.

Freesia refracta Alba The large flowers of this cultivar have snow-white petals with violet stripes on a yellow spot at their base.

Freesia refracta odorata The inflorescences have 3 to 7 yellow flowers each. At the base each petal has an orange spot. The plant has a strong aroma of may lily.

Any of these three species of freesia can have single or double flowers. In gardening stores you can find bulbs either of a certain cultivation or a mixed set of different varieties. This enables you to fill your garden with several kinds of freesia in many colours.

The best way to create ideal growing conditions for freesia is to use a green house. But honestly, for that you need to be a highly experienced or professional flower gardener. In southern regions you can grow freesia outdoors throughout the year. But if you have cold winters in your region, you will need to dig up the bulbs in the Autumn and store them over Winter.

You can grow freesia as a house plant as well. Indoor freesia normally blooms during the Winter.

There are some general rules for growing freesia indoors or outdoors that we are going to review.

How to grow a freesia in your garden?

It's better to sprout freesia before planting it into a flower bed.

In March or April peel off the bulbs' skin and put the them into a 0.2% fungicide solution for 30 mins. Then plant the bulbs into rich light soil in peat pots (5 cm deep) and keep them at a well lighted window or in a veranda.

Some gardeners grow freesia from seed as well, but it's a quite difficult process with an absolutely unpredictable outcome. Nevertheless, we are going to teach you how to do it.

Carefully put freesia seeds onto moistened soil, cover it with a 2 cm layer of soil, cover with plastic foil or glass, and keep them in a light room. First sprouts are expected to pop up in about 20 days. When they are 2–3 cm high, take off the glass and thin the sprouts well. 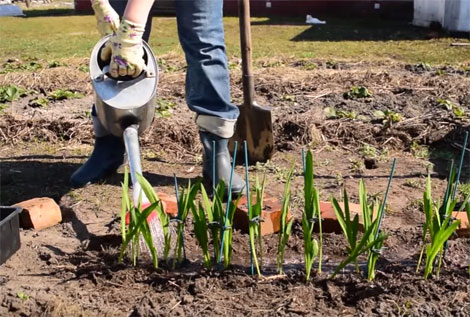 You need to plant your freesia in the beginning of the Spring, when there are no more frosts. Prepare holes around 3 to 6 cm deep, 5 cm apart for large bulbs and 3 cm apart for little bulbs, and keep 15 cm inbetween the rows.

Plant the bulbs into the holes, cover with soil and then mulch the ground with peat, to protect freesias' root system from overwarming.

Regularly loosen the soil and control weed, especially in the beginning of growth. Water freesia plentifully, the soil needs to stay moist.

The blooming period of freesia lasts from 3 to 6 weeks. When it's over, slowly stop watering the plants and just keep the air humid, spraying your freesias once a while with water. It's better if you do it in the afternoon, when the sun is down but soil still has enough time to soak up the water.

When first frosts are coming, it's time to dig up your freesia bulbs.

Thrips, plant lice, red spider mites, scab, fusarium disease and molds... The list of pests and diseases that are dangerous for freesia is very similar to the list for tulips.

If there are damaged leaves on your freesia, you need to remove them. To prevent diseases, disinfect the bulbs before both storing and planting with a light potassium permanganate solution e. g.

During blooming period be careful not to overwater freesias, and also assure that the soil isn't too dry.

Many people love growing freesia as a house plant, thanks to its beautiful blooming during Winter and Spring. To have your freesia flowering exactly during the cold winter period, you need to plant it before September. Before you start planting, put the bulbs for 30 min into a bacterial fertilizer solution. You can also treat them with a growth enhancer.

Put a layer of drainage at the bottom of a pot that you are going to use for planting freesia, and fill it with a suitable ground mix (sand, humus and muck soil 1:2:1) with an addition of a phosphate potash fertilizer.

In this pot plant 5 to 6 bulbs 5 to 6 cm deep, and put the pot in a cool (10–15 °C) light room. Don't water the bulbs before you see first sprouts. Once sprouted, you can move freesia into a room with the air temperature about 20 to 22 °C and start moistening the soil regularly.

Assure that your plants have 12 hours of light per day. It means that you probably need to provide artificial light with fluorescent lamps during the Winter. Especially if you can't keep your freesia at a window in the eastern or western parts of your house.

As well, you will need to support the stalks of freesia, so they don't break under the weight of their flowers.

To water indoor freesia, use settled water. Moisten the soil only when the top layer is dry. During its flowering period, water freesia regularly and thoroughly. To keep the air around your plant humid, spray water onto the foliage or just keep the flower pot in a colder room, in the veranda for example.

Fertilize indoor freesia with mineral fertilizers once in two weeks. Stop fertilizing, when the leaves of freesia have wilted.

Once your freesia is done with blooming, cut off its leaves and stem, and keep watering the remaining part (the bulb) for a month or two, so it will get a couple of daughter bulbs.

Then carefully dig up the bulb, disinfect it, and dry it for a couple of days in a warm room. Then it's ready to be stored over winter.

You need to dig up bulbs of outdoor freesia in the Fall, when it's finished with flowering and its leaves get yellow but aren't yet dry.

Cut off the foliage, clean the bulbs from soil, roots and old skin, and put them for 30 min into a disinfection solution (fungicide e. g.) After, put the bulbs to dry for a few days at the temperature of 25 to 28 °C in a well aired room. Then sort the bulbs, removing all the bad or rotten items, and store for the Winter.

Recommended articles for you:

If you don't have such a room, just hang the net with bulbs up, and put a bowl of water under it. You need to check them at least one time per month, removing all the bad or sick bulbs.

A month before planting, move freesia bulbs into a colder place (10–15 °C).

Some flower gardeners advice to store freesia bulbs in dry peat. Or, if you live in a warm region, you can just leave the bulbs in their garden bed, covered with fallen leaves or boughs of coniferous trees.

﻿
COMMENTS ON “Freesia: Planting and Growing, Indoors or Out”