Ficuses are very popular indoor plants. They don't ask a lot of your effort and are really easy in handling. Ficus is an evergreen plant that very easily adapts to new environments.

There are many different kinds of ficuses. Perhaps, the most popular of all is the Weeping fig, that is also called Benjamin's fig or Ficus benjamina. It looks very unusual comparing to most ficuses, and reminds rather of some different plants. However, the weeping fig gains more and more interest of indoor gardeners over the years.

What do you need to know for the successful growing of weeping fig indoors?

First of all, let's not forget about the fact that ficuses are exotic plants. Weeping fig is an evergreen member of the Moraceae family. Its origins are the tropical and subtropical forests of India, China and the east part of Western Asia. You can also stumble upon a weeping fig in nature in The Philippines and in the Northern Australia. 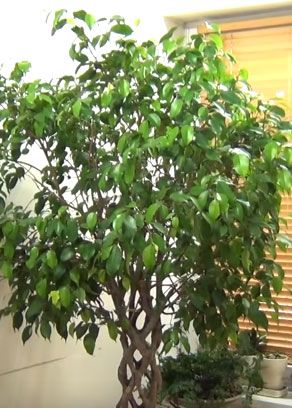 Even an indoor weeping fig looks like a little tree. It's got a short stem with a smooth grey-beige bark and branched crown. Since a weeping fig is a tropical plant, it has many typical aerial roots.

Put your weeping fig in a spot with a diffused light, well away from direct sunlight. Here you can see the difference with the handling of other types of ficuses. Species with very green, single-coloured leaves love growing in the sun light, and Ficus benjamina does absolutely not.

For weeping figs, dry air is even worse than bright sunlight. In nature the plant grows in the humid conditions of tropical woods. However, it doesn't mean that you have to water a weeping fig as mush as possible. If you overwater your fig, it can get a root rot disease. As a result, the beautiful leaves will get ugly dark spots.

To keep the air humid, just irrigate your weeping fig every day. And when the weather stays hot, spray the plant with water several times per day.

Why Does My Weeping Fig Loose Its Leaves?

The most common problem of all the ficus gardeners is a leaf abscission. There are many factors that can cause it, such as:

Any of these can be a cause of leaf fall.

Necessary Steps in Handling Of a Weeping Fig

Still you can consider a weeping fig as an easy to handle plant. All the conditions that a weeping fig requires are really easy to manage. Here is a list of some necessary steps you have to do to keep your plant satisfied and successfully growing:

Transplanting Of a Weeping Fig

Normally, after bringing your weeping fig home from a gardening store, you only can transplant it after two to three weeks. First, let the plant adapt to a new environment. Sometimes a weeping fig gets stressed anyway, therefore starts loosing leaves. Experts say it is a normal reaction of the plant to new conditions.

If you have no idea how to transplant a weeping fig, just follow these recommendations. It's easy!

The easiest way is to cut off a top sprout, root it in water, and subsequently plant it into the soil. You can also root a stem straight in the moistened ground. Due to its aerial root system, a weeping fig strikes roots really well.

Recommended articles for you:

Another common way of propagating ficuses at home is to clone them by layering. Carefully cut a trench all around the stem, make sure not to cut through the branch, so it does not break. Wrap the cut spot with a moistened sphagnum moss, then cover this area with plastic foil or a transparent plastic bag to avoid the moss getting dry. After about 2 months the plastic bag will be filled with new roots. So you just need to cut off the part of the stem with fresh roots and plant it into the soil.

Important to know is that this way of propagation can only be done in the summer, when the plant is not in its growing or resting period.

And one more thing. Try not to move your weeping fig from spot to spot, the most of all it appreciates stability and peace.